The Archer – Sarles Family Graveyard is located within the property at 445 Armonk Road (Route 128), part of the Castle Tree Nursery.  There is no clear path into the site; accessible by climbing up a rocky face of loose gravel.  The 100 foot square is enclosed by a rough stone wall.  It now sits on an isolated knoll, around which most of the soil has been excavated.  The graveyard contains monuments for about 150 graves:  66 with inscribed markers and 88 with blank fieldstones.

The graveyard dates back to the middle of the 18th century, begun by members of the Sarles family.  Almost all are descended from Solomon and Abigail Sarles or Gabriel and Susannah Archer.

In 1841, Robert and Phebe Sarles deeded 60 acres, including the graveyard, to their son Robert Jr.; the graveyard was specifically exempted from the property, together with a right-of-way out to Armonk Road.  This condition was apparently inserted into the deed on the assumption that members of the families would always look out for the graveyard. In the 20th century, both families left the area and the graveyard became abandoned. So, according to New York State law, it has become the responsibility of the Town of New Castle to provide it with at least minimal maintenance.

This cemetery has no official signage.

The following is a list of all veterans that were laid to rest at this cemetery. Click on a name for more information. 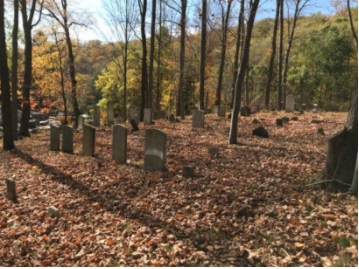